1. how did you get into GSD and why did you choose GSD's? Was the GSD the first purebred you owned?

Our first German Shepherd Dog was purchased early in my marriage. German Shepherds were my husbands's choice. I really wanted a "Lassie." I always loved horses and dogs, so I would have settled for any large breed as long s it had 4 legs and a tail. As a youngster I put on a neighborhood dog show, and I do believe I was the judge. Hmm… what does that say? At any rate, my "Best Dog In The Neighborhood" was a Collie named Laddy.

Our kennel name is Merivern. It is a combination of my husband and my name. Merivern looked cooler to me than Maryvern so that's how we chose it.

We started showing dogs in the 1960's. I showed them and my husband showed them. We took our first litter to a match and two litter maters from a local breeder sired by Fels of Arbywood went Best Puppy and Best Opposite. Our puppies placed in their classes. The judge was Donald Ames. We went home and sold all our puppies and went out to find a bitch that could produce puppies like the ones that beat us.

4. What is your perception of showing dogs then… as to now?

In the past, the numbers in the classes were much larger. the numbers are down now but the quality in most cases is much thicker.

5. When did you breed your first homebred champion and who was it?

We finished our first champion in 1969. His name was Anew Frontier of Merivern. He was out of a Gr. Victor Ch. Alert of Mi-Noah ROM daughter and sired by a Ch. Field Marshall of Arbywood son.  We purchased his dam as a 5 year old and bred her once, got our champion, sold her and throughout we were really smart. Until we discovered the difference between a "producing" bitch and one that just gives your puppies. We went quite a few years before we had that same quality in our kennel.

6. Who has the greatest influence on you during your early attraction to the dog world?

Sandy Krueger, Barbara Nutter St. John and Norma & Paul Faford were our mentors and friends in the early years. I co-bred some pretty nice sables with Pat Lotts and of course, lucky enough to know Jerry & Arlene Keller, the co-breeders and owners of Gr. Victor Ch. Sequel's Senator of Merivern ROM. With a top handler living in the next town and co-owning and co-breeding some of our litters with him did not hurt. Gary Staser could also help us get our promising youngsters in the right hands. As in any success in life, lots of people gas us a hand and encouragement. Ed Binning finished our first Champion while he was working with Denise Kodner, back when she was a handler. Gary Staser finished a large number for us and made some of them Selects.

7. When you were first starting in GSD's what breeders impressed you the most?

Lucy Woodard of Arbywood Kennels was very impressive. She would show up at dog shows with all three of those beautiful males in her station wagon. She was very friendly and gracious lady. Never heard her brag, but then I guess she didn't have to.

8. Of all your many wins, which one had the greatest meaning to you?

I think the most thrilling win for me, would have to be my teen age daughter Tracee, guiding Sel. Ch. Emerhein's Deri of Merivern to second select under Ralph Roberts. I mean, I can still get tears in my eyes thinking about it.

9. Who do you admire in today's scene and why?

I admire the Cliffs, all three of them. They own, in my opinion one of the greatest producing dogs of current times. Always giving credit to the lovely bitches bred to Bailey and the beautiful dogs in his background and their breeders. I have, over the years admired many breeders, of course the Fords, the Rinkes, Jane Kerner, Fred Migliore. My currents buddies Fran and Jerry Rood, Pat Walker and her lovely daughter Deb Norman. All good dogs need to be presented to perfection and no one does it better than Mike Sherman and Debbie Atkinson. I would also have to includes Jim Moses, as a breeder, handler, judge and icon of the breed. 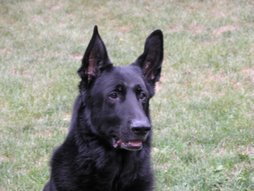 Merivern has been a successful kennel showing and breeding German Shepherds for years. 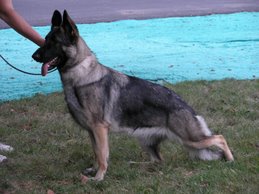